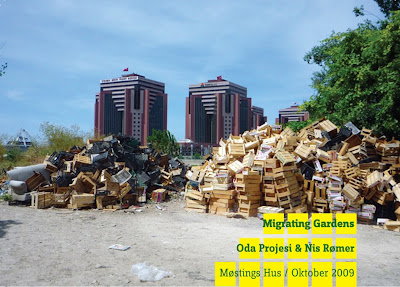 Migrating Gardens is a collaborative project by Oda Projesi and Nis Rømer reflecting on the relation of micro-scale farming and migration. It is an investigation of why people move from one environment to another and how they manifest themselves in the city with their practices/professions from where they come from. The collaboration of Oda Projesi and Nis Rømer started with an inspirational visit to a Bostan, (old vegetable gardens of İstanbul) situated along the old walls of the city, still lying in its space of origin as a way of treating the land. The "bostan tradition" exists in the city of Istanbul since the Byzantian Period and was run by different people mentioned to be “minority” and is now run by the immigrants from the other regions of Turkey.

In Denmark farming has been a determining factor in national culture and identity and in the shaping of politics up until today through major political parties. Only one generation ago there was a farmer in most families. Today less than ½ % of the Danish population owns 63% of the land in Denmark. Being an industrialized farming nation and a part of EU, Danish agriculture is also a part of the complex problem of migration. Heavily subsidized food is dumped on the world market making it impossible for poorer regions to compete and live of their land.

One of the most important tendencies globally is the move from the countryside to major cities. UN estimated that 2007 was the first year when more than 50% of the worlds population lived in cities. One reason for this is that farming can no longer subsidize existence. In the coming years it is likely that climate change will drive even more people to migrate both nationally and internationally.

İstanbul is one of the strongest examples of this. It has grown with express speed from 800.000 inhabitants in 1950 to 12-15 millions today. This growth mainly happened by migration from the countryside and it has shaped the city, culture and society fundamentally.

The collaboration will lead a way to look at the usage of city space in different terms and point out to the micro scale interventions. The show will be acompagnied by a free newspaper with articles around the Bostan effect and the situation in Denmark both from geographical, NGO’s, historical perspective and with interviews with the gardeners from İstanbul and Copenhagen. The exhibition will share the documentation of the research while the lake will host floating gardens in inflated tractor tubes, a reference to the practice by some refugees attempting to cross the Mediterranean using inflated tubes as vessels.


The project will coincide with the climate summit in Copenhagen 2009.


Events Program:
Friday the 2nd of October
Opening of the Migrating Gardens exhibition

Thursday the 15th of October at 17.00
Pls. dont step on the green
A talk by the artist group Oda Projesi about their work and opening of Migrating Gardens II